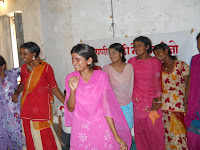 In Barmer, many girls do not attend school after their eighth, or sometimes fifth, year.  In some villages, there are not even schools for girls beyond the eighth grade.  In the 2010-2011 year, Vikalp organized a residential girls education camp to last six months.  12 girls from various villages in Barmer participated in the education camp.  Ten of the girls were in the 10th class while the other two came from supplementary.  The families of these girls supported them in attending the Vikalp camp and desiring to continue their education.  However, the remainder of the village was not so open, often saying bad things about the girls.  Many villagers believed that there is no value in educating girls because they will marry, move to the husband’s family, and no longer be needed in their original family.  However, as one participant’s parent stated, the girls “will have confidence and will make good decisions for [their] futures” because of the camp. 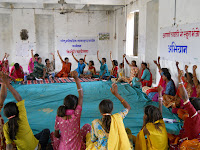 The girls all graduated from their 10th year class.  Not only did they continue their normal studies, but the camp gave the girls confidence, the ability to say ‘no,’ the importance of girls education, lessons on sanitation and hygiene, communication skills, and self-respect.  After they passed their exams, the girls applied for higher education and are now studying in schools of higher education.  After this accomplishment, not only are they and their families very proud, but some villagers have changed their opinion and are now sending their daughters to continue their schooling.
After finishing their exams, the girls took a trip to Barmer city together, sponsored by Vikalp.  Over the course of two days, the girls met with a district collector, the Barmer police superintendent, the Gila Parmuk and other officers.  They also visited a park in Barmer, and enjoyed their time together. 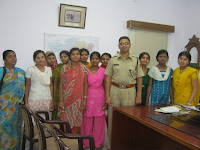 Once month after the culmination of the education camp, Vikalp organized a girls adolescent training.  The twelve girls attended this training and shared with the others their positive experiences with Vikalp’s education camp.  They motivated the girls to continue their schooling, attend this camp if possible, and secure higher education!  The girls all took the responsibility of returning to their villages to try to convince all girls to enroll in school.
The girls in the camp had an extremely positive experience.  They showed courage as they broke away from the norm in their Barmer villages, as they followed their dreams toward a higher education and a better future. 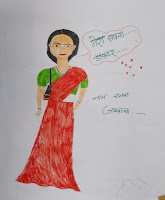 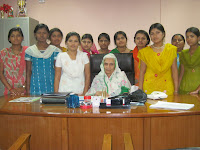